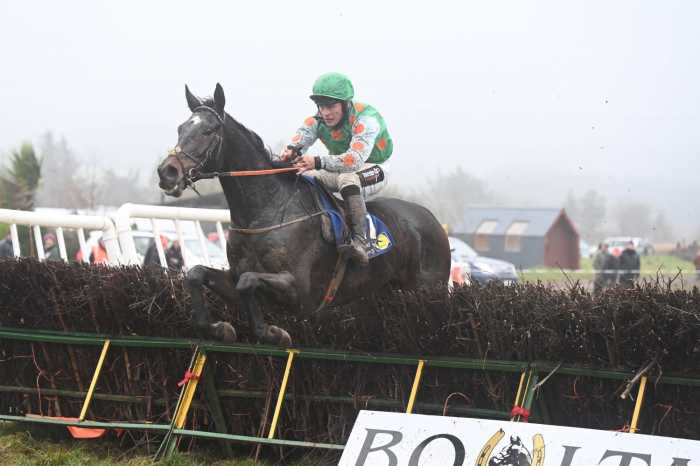 Racing’s online auction house introduced the Point2Rules bonus earlier in the month, offering up to £15,000 (£5,000 for Irish P2P graduates, extra £10,000 for British) in bonuses for pointers sold via the platform who go on to win first time out under rules, with the first hopefuls going under the hammer last night.

Kim Bailey went to £34,000 to secure 4yo Tullywest, a son of Dylan Thomas who finished third on his only P2P outing in October, while Desertmore House, a physically-imposing son of Court Cave who won at Kildorrery on his only start in a 6yr+ geldings maiden, was another pointer to go under ThoroughBid’s online hammer, selling for £23,500. He will now be aimed at bumpers in the Spring by his new trainer, Martin Brassil, for owner-rider John Reddington.

Rounding off a strong evening of trade for the sale of pointers, Heritier de Sivola, from J W Doyle’s Baltimore Stables, sold for £18,000 and will continue his career in the hands of Philip Kirby.

James Richardson, CEO of ThoroughBid, said: “Each sale has been a bit different and this time we’re particularly pleased to have sold some nice pointers. We announced the new Point2Rules bonus at the back end of November and that’s certainly attracted some promising types. Again, the feedback from those bidding last night has been hugely positive and we’re delighted to have closed out the year on a high.

“Having only kicked off with our first auction in September, we’ve now completed four and have a fifth slated for January 16th – the All-Weather Sale. Selling Belfast Banter was an obvious highlight for us, while having completed sales for a variety of top trainers, studs and point-to-point yards, we’re really pleased with how things have begun.”

ThoroughBid’s next auction is the All-Weather Sale on Sunday 16th January. The auction is exclusively for horses in training and is a chance for connections to qualify their horse for the £30,000 All-Weather Challenge. The new incentive will see all horses sold go on to earn points across the UK and Ireland’s six winter Flat tracks until 28th April. With 10 points awarded for a win, four for finishing second and one for third, the horse sitting at the top of the leaderboard on 28thApril will earn connections £20,000, the runner-up receives £7,500 and £2,500 goes to the third-ranked horse.